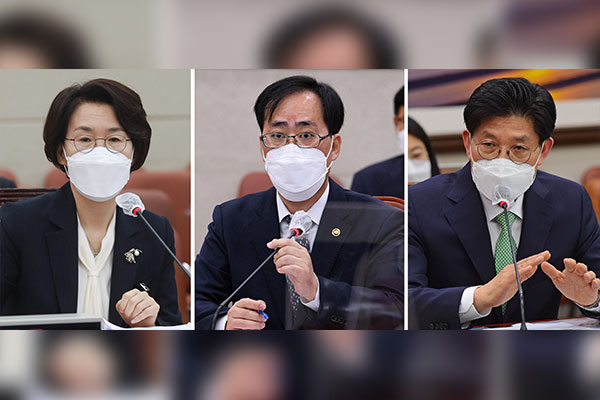 Freshman lawmakers of the ruling Democratic Party(DP) have urged the party leadership to recommend to the presidential office that it dismiss at least one of the three remaining Cabinet minister nominees for being unfit.

This comes after President Moon Jae-in requested a second time for parliament to send confirmation hearing reports for the science, fisheries and land minister nominees by Friday, despite the main opposition's fierce protest.

DP Rep. Ko Young-in, who heads the group of first-term lawmakers, said the request was made out of respect for strict standards that are in line with public expectation.

The group, however, will not specify which of the three nominees facing ethical lapse allegations should be dismissed.

As for Moon's request made the previous day, which some viewed as his resolve to push ahead with the appointments, the group said it could carry a message for the Assembly to take time for reconsideration.

If the rival parties fail to agree on the hearing reports by Friday, Moon can appoint the nominees without parliamentary approval.
Share
Print
List