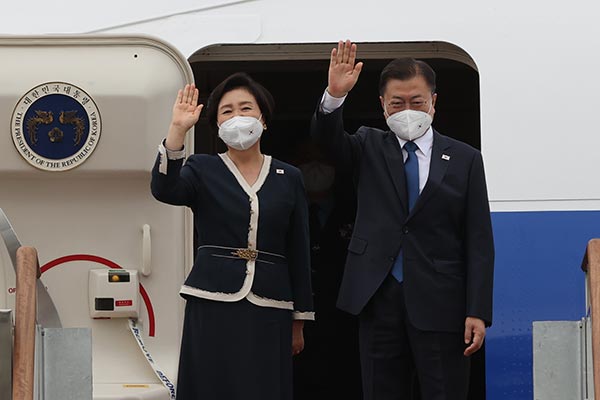 Anchor: President Moon Jae-in departed for Britain on Friday to attend the G7 summit where leaders are set to discuss COVID-19 vaccines and climate change, among other pending issues. After wrapping up his trip there, Moon is set to make state visits to Austria and Spain.
Our Bae Joo-yon has more.

Report: President Moon Jae-in departed for Britain on Friday to take part in the Group of Seven(G7) summit which will be held for three days until Sunday in Cornwall.

South Korea is not a member of the G7, but Moon was invited to the summit as a guest along with India, Australia and South Africa.

During his three-day stay, Moon will attend three sessions on ways to boost cooperation in vaccine supply and in promoting values of open societies, as well as on responding to climate change.

The president is also set to share the country’s experiences regarding the Korean New Deal initiative during these sessions.

On the sidelines of the G7 summit, Moon will hold separate bilateral talks with the leaders of Britain, Australia and the European Union.

Given the possibility that other forms of dialogue might happen outside official sessions, attention is being drawn to whether trilateral talks among South Korea, the U.S. and Japan or a meeting between Seoul and Tokyo will take place.

After wrapping up his stay in Britain, Moon will continue on to a state visit to Austria from Sunday to Tuesday and meet with President Alexander Van der Bellen and Prime Minister Sebastian Kurz.

Moon will then head to Spain for a three-day state visit during which he will attend a dinner hosted by King Felipe the Sixth and hold a summit with Prime Minister Pedro Sánchez.
Bae Joo-yon, KBS World Radio News.
Share
Print
List