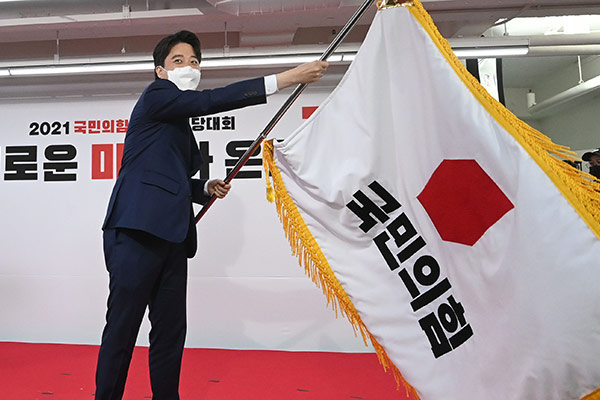 Report: Throughout his campaign, 36-year old Lee Jun-seok argued that the old leadership of the People Power Party cannot offer a viable alternative to the progressive ruling camp as his rivals sought to highlight his lack of experience.

In his victory speech, Lee said he will create a party where the individual characteristics of its young and old members will be respected in political harmony ahead of the presidential election in March.

[Sound bite: Lee Jun-seok – newly-elected Chairman, People Power Party (Korean-English translation)]
"The great mission upon us is to win the presidential election, and in the process, I will create a party where various presidential contenders and their supporters can coexist."

Recognized as a witty and ruthless political commentator, Lee served as an emergency Supreme Council member for the party but has never won a legislative seat.

[Sound bite: Lee Jun-seok – newly-elected Chairman, People Power Party (Korean-English translation)]
"The ideas for change that I bring and the concerned eyes of the traditional party members will be seen by the people as our fierce, war-like struggle for change, and that change will lead us to our victory."

The Harvard graduate ran an education technology startup in 2011 when he was recruited by the then-ruling Grand National Party chief Park Geun-hye, who later became president.

In the political turmoil leading up to the impeachment of Park, Lee in 2016 bolted and joined the Bareun Party of 30 anti-Park lawmakers before his eventual return to the main opposition in 2020.

The newly elected PPP chief’s first job will be to reconcile those who left and those who remained in the devastated party back in 2016.

Lee's election comes as the ruling Democratic Party lost support from disillusioned young voters in the Seoul and Busan mayoral by-elections two months ago and as the main opposition is aiming to steal that momentum for the upcoming presidential election.