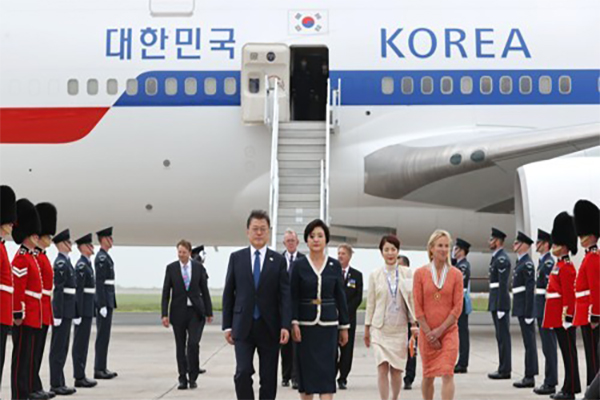 Anchor: President Moon Jae-in arrived in Britain on Friday to join the Group of Seven(G7) summit which will be held for three days until Sunday in Cornwall. G7 and guest leaders are set to discuss COVID-19 vaccines and climate change.
As our Kim Bum-soo reports, Moon may have to deal with some sensitive issues while in Cornwall, as Seoul walks a thin line on China and Japan issues.

Report: Along with India, Australia and South Africa, South Korea is invited as a guest to the Group of Seven(G7) meeting as the world’s wealthiest democracies seek to tackle issues related to the COVID-19 pandemic and climate change.

During this year's gathering, the G-7 leaders are expected to commit to sharing at least one billion coronavirus shots with struggling countries around the world.

They are also expected to endorse a minimum global tax rate on corporations of at least 15 percent, an initiative the finance ministers of the member nations agreed last weekend.

Attending three sessions of the expanded G7, South Korean President Moon Jae-in will share his "Green New Deal" initiative aimed at harnessing investment in green technology in a bid recover from the pandemic, according to the presidential office in Seoul.

As Seoul walks a fine line between the U.S. and China, Moon will also join discussions on Beijing's economic coercion, an issue that will be raised by Australia.

On the sidelines of the G7 summit, Moon will hold separate talks with the leaders of Britain, Australia and the European Union, but it is uncertain if the South Korean president will meet Japanese Prime Minister Yoshihide Suga amid strained bilateral ties.

After wrapping up his stay in Britain, Moon will continue on to a state visit to Austria from Sunday to Tuesday, where he will meet with President Alexander Van der Bellen and Prime Minister Sebastian Kurz.

Moon will then head to Spain for another three-day state visit during which he will attend a dinner hosted by King Felipe the Sixth and hold a summit with Prime Minister Pedro Sánchez.
Kim Bum-soo, KBS World Radio News.
Share
Print
List