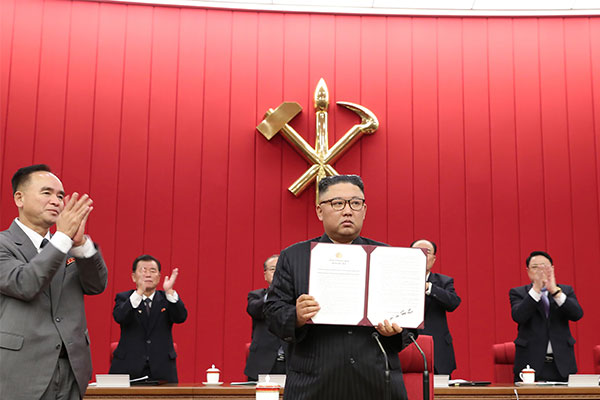 Anchor: North Korean leader Kim Jong-un highlighted the need to prepare for both dialogue and confrontation in his first message towards the U.S. and South Korea, since the inauguration of President Joe Biden in January. This comes as Washington's point man on the North, Sung Kim, is due to visit Seoul later this week to discuss the stalled denuclearization talks.
Choi You Sun reports.

Report: On the third day of a plenary session of the ruling Workers' Party Central Committee on Thursday, North Korean leader Kim Jong-un emphasized the need to prepare for both dialogue and confrontation with the U.S.

According to North Korean media outlets on Friday, Kim said such preparations would be necessary for national safety.

[Sound bite: Korean Central Television (June 18/Korean-English translation)]
"The General Secretary stressed the need to get prepared for both dialogue and
confrontation, especially to get fully prepared for confrontation in order to protect the dignity of our state and its interests for independent development and to reliably guarantee the peaceful environment and the security of our state."

Clarifying the North's foreign policy direction to enhance its strategic status and proactive role, and to lead efforts to create a diplomatic environment in its favor, Kim stressed the need to manage the situation on the Korean Peninsula in a stable manner.

[Sound bite: Korean Central Television (June 18/Korean-English translation)]
"Especially he made detailed analysis of the policy tendency of the newly emerged U.S. administration toward our Republic and clarified appropriate strategic and tactical counteraction and the direction of activities to be maintained in the relations with the U.S. in the days ahead."

This is Kim Jong-un's first message towards the U.S. and South Korea since President Joe Biden took office in January and completed a review of Washington's North Korea policy.

Some have positively assessed the North Korean leader's remarks, as he has opened the door to stability and dialogue. The emphasis on taking a "proactive role" suggests that the North may be open to returning to the denuclearization dialogue.

The Biden administration, which pledged to pursue a "calibrated, practical approach" toward the goal of the peninsula's complete denuclearization, is set to send Sung Kim, its new North Korea special representative, to Seoul on Saturday.