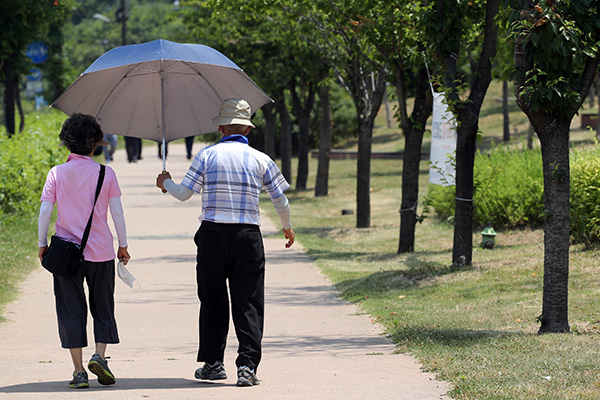 According to the Daegu branch of the Korea Meteorological Administration (KMA), the mercury rose to 34-point-one degrees in the southeastern city as of 2 p.m. Jeonju is also seeing sweltering temperatures of 33-point-two with Cheongju and Daejeon climbing to 32-point-nine degrees.

As measured by the Automatic Weather System, temperatures in Gapyeong, Gyeonggi Province, have even risen to 35-point-seven degrees Celsius.

The port city of Busan had its first tropical night this season, which is when the mercury stays above 25 degrees after 6 p.m. Residents of other coastal areas also battled hot nights.

The steaming weather is forecast to continue for the time being.

Heat advisories have been issued for most parts of the country through at least Wednesday. Daytime highs are projected to exceed 32 degrees, with high humidity.