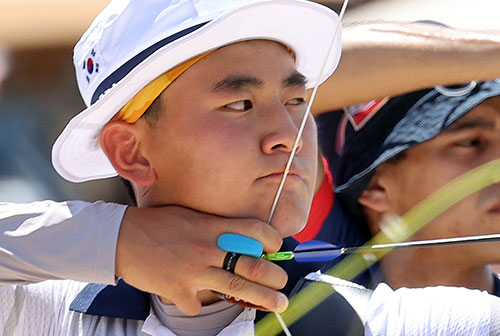 The youngest South Korean archers competing in the Tokyo Olympics are eyeing to rewrite history.

The youngest of the men's team, 17-year-old prodigy Kim Je-deok, and the youngest member on the women's side, 20-year-old An San, both have an opportunity to become the first archer ever to win three gold medals in a single Olympics.

During the men's individual ranking round held on Friday, Kim shot 688 out of a possible 720 points on 72 arrows at Tokyo's Yumenoshima Park Archery Field, coming out on top among 64 contenders.

His teammates Oh Jin-hyek came in third and Kim Woo-jin fourth. With their combined score, South Korea earned the top seed for the men's team event.

Five gold medals are up for grabs in archery at the Tokyo Games as a mixed event has been newly introduced.

Kim and An San, who ranked first in the women's ranking round, will compete together in the inaugural mixed team event scheduled for Saturday morning.

The two will also compete in their respective team and individual events, with a possible three gold medals in sight.
Share
Print
List