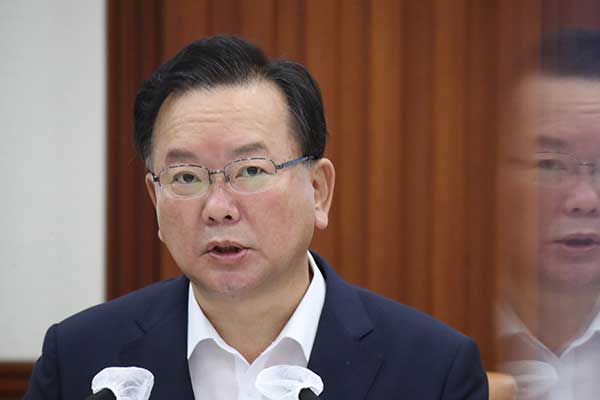 The government on Saturday held a Cabinet meeting chaired by Prime Minister Kim Boo-kyum and approved plans for the allocation of an extra budget green-lighted by the parliament earlier in the day.

In the early hours of Saturday, the National Assembly endorsed a 34-point-nine trillion won supplementary budget that includes relief funds for the general public and small business owners.

Kim said in the meeting that everyone is going through tough times but the sacrifice and pain endured by small businesses, the self-employed and irregular workers is unspeakable.

He called on relevant agencies to swiftly execute the budget so the money can quickly reach those in need.

The prime minister particularly called for a speedy release of funds going to small merchants who have been hit hard by pandemic restrictions.

Regarding relief payouts to the general public whose recipients have been expanded in the finalized extra budget, Kim said any more controversy on this issue is not desirable.

Kim said a return to normalcy has been delayed yet again, in reference to the fourth wave of the outbreak, and that case numbers could go up even further.

He asked for cooperation from the public in observing antivirus measures to overcome this critical juncture in the fight against COVID-19 and bring back normal life.
Share
Print
List