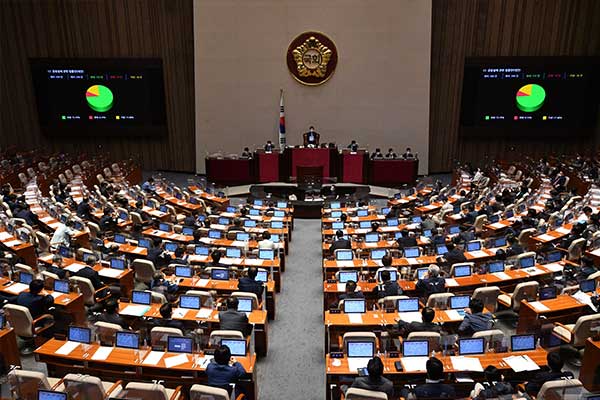 The National Assembly, in a plenary session late Friday, approved a resolution calling for reforms and information disclosures by state intelligence agencies in relation to illegal surveillance allegations involving the National Intelligence Service.

A total of 81 bills were approved during the late night session that began past 10 p.m., including a revision to the Farmland Act which has tightened deliberations on the acquisition of agricultural land, following the massive real estate speculation scandal involving employees at the Korea Land and Housing Corporation.

Other bills include revisions to civil and criminal proceedings laws aimed at expanding online court trials due to stepped-up distancing rules amid the COVID-19 pandemic.

Other revised bills that were passed concern best-before date labels on food, the advertisement of cosmetics to prevent confusion with food products, mandating rest areas at workplaces that are over a certain size and providing livelihood support to destitute war veterans and participants of the democratization movement aged 80 and older.