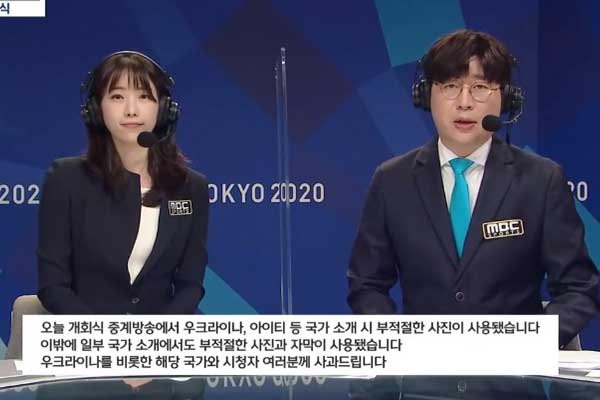 In a statement Saturday, MBC said some of the images and captions used in introducing various countries during the opening ceremony were inappropriate and that it sincerely apologizes to viewers and the people of those countries.

It said the photos and expressions were intended to briefly introduce the countries as athletes entered the stadium, but it turned out to be an inexcusable mistake.

The broadcaster said it views the mishap very seriously and will take this opportunity to fully inspect related procedures regarding image and caption work and take follow-up measures based on the findings.

In relaying the opening ceremony, a photo of the Chernobyl nuclear power plant was used to introduce Ukraine, bitcoin images for El Salvador, and a picture of the Bram Stoker character Dracula, a vampire from the fictional country Transylvania, for Romania.

Images of protests and captions indicating the recent presidential assassination were shown when athletes of Haiti entered the stadium.