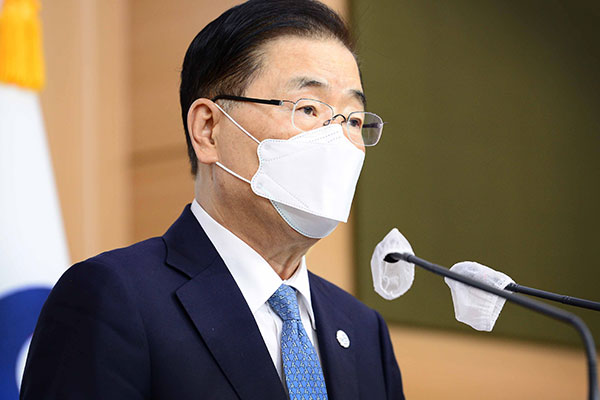 Foreign Minister Chung Eui-yong will attend a series of major regional security forums led by the Association of Southeast Asian Nations(ASEAN) next week to discuss international cooperation on COVID-19 and the economy.

The Foreign Ministry said on Thursday that Chung will attend four major foreign ministerial gatherings between Tuesday and Friday, starting with the Korea-ASEAN meeting and ASEAN Plus Three meeting on Tuesday.

He will also take part in the East Asian Summit on Wednesday and the ASEAN Regional Forum on Friday. All events will be held virtually for the second year in a row due to the global pandemic.

Chung is expected to introduce Seoul’s efforts to move forward on efforts towards a complete denuclearization and lasting peace on the Korean Peninsula and call for support from participating nations on that front.

A senior official at the Foreign Ministry, who declined to be identified, told reporters that the government hopes that these forums will also serve as a chance to draw support for the recent resumption of inter-Korean communication channels.

The ARF consists of 27 members including North Korea and one of its envoys is expected to attend the upcoming meetings, most likely its ambassador to ASEAN An Kwang-il.
Share
Print
List