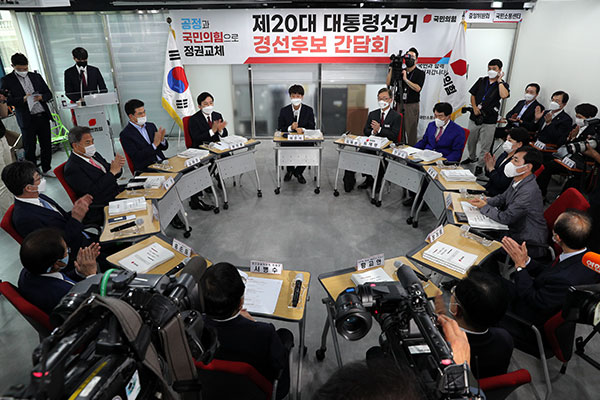 The eleven presidential contenders of the main opposition People Power Party(PPP) gathered for the first time on Thursday to learn the rules of the party’s primary.

Among the participants were former Board of Audit and Inspection head Choe Jae-hyeong, former lawmaker Yoo Seong-min and former Incheon Mayor Ahn Sang-soo.

The participants vowed to focus on policies rather than slander and defamation, and expressed concerns over campaign strategies, factional politics and the way the race will be carried out.

Former legislator Yoo Seong-min said the party won’t be able to win the presidential race solely by focusing on denouncing the current government while Rep. Kim Tae-ho said party members must refrain from constantly changing their factions to favor a particular candidate.

The former Incheon mayor, for his part, expressed opposition to the party’s plan to survey the public instead of party members in the first round of the primary.