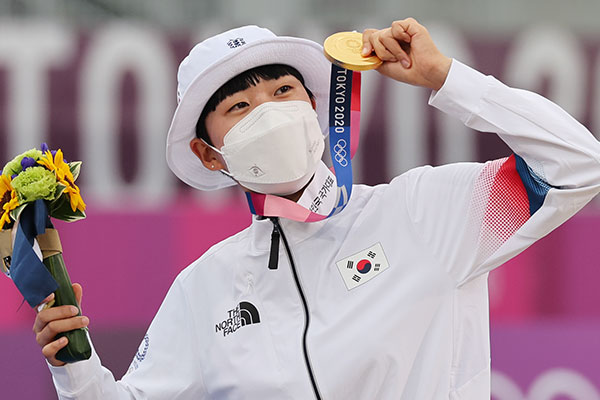 South Korean female archer An San has won her third gold medal at the Tokyo Olympics.

In the women’s individual event final held at Yumenoshima Park on Friday, An beat Elena Osipova of the Russian Olympic Committee 6-5 to become the first archer ever to claim three gold medals at an Olympics.

The 20-year-old earlier won the mixed team event, which has been added to the Olympics for the first time, and also won the women’s team event.

With An’s victory, Team Korea is a step closer to sweeping all five gold medals in archery at the Tokyo Games.

Kim Woo-jin, who won the men’s team event alongside Oh Jin-hyek and Kim Je-deok, will continue his quest to win the individual title when he faces Khairul Anuar Mohamad of Malaysia in the Round of 16 on Saturday.