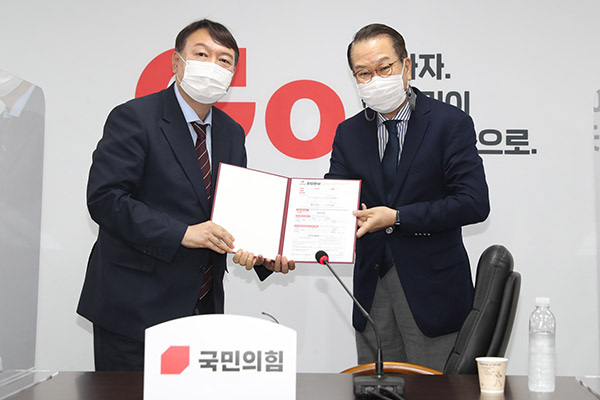 In a briefing on Friday, DP spokesperson Lee Yong-bin described Yoon joining the PPP earlier in the day as an blatant declaration as a political prosecutor.

He said it is deplorable for a person who spearheaded investigations into former President Park Geun-hye’s corruption allegations to join the party which served as the power base for the impeached president, adding that his induction into PPP is evidence that his platform for law and justice is simply for show.

PPP Chair Lee Jun-seok, on the other hand, welcomed Yoon, saying it is positive that he joined the party a month earlier than initially speculated.

Pointing to his earlier meeting with Yoon, Lee said the two were able to reduce much of their differences. He also dismissed criticism against Yoon as politically motivated and meant to sow discord.
Share
Print
List