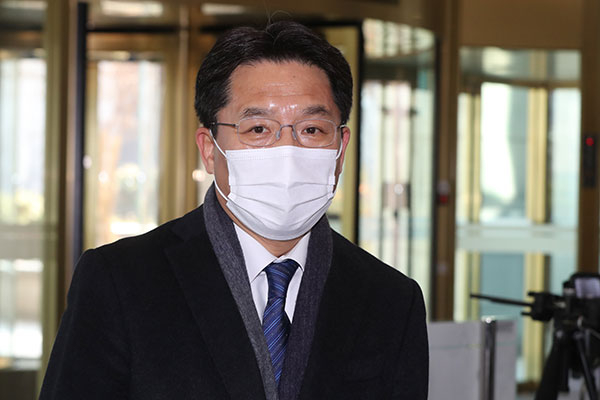 South Korea's top nuclear envoy Noh Kyu-duk has departed for Japan for talks with his American and Japanese counterparts on the North Korean nuclear issue.

Speaking to reporters at Incheon International Airport before his departure, Noh said that he is visiting Tokyo at the invitation of the Japanese government, with hopes for a productive discussion that advances the Korean Peninsula peace process.

According to Seoul's Foreign Ministry, Noh will visit Tokyo from Sunday to Tuesday.

Noh will hold bilateral talks with his Japanese counterpart Takehiro Funakoshi on Monday. Talks with United States special representative for North Korea Sung Kim as well as a three-way meeting with both the U.S. and Japan are scheduled for Tuesday.

Asked about the key agenda for the meetings, Noh said that he believes resuming dialogue with North Korea is most important.

The envoy added that there has been significant progress in negotiations between Seoul and Washington on a possible joint humanitarian project in a bid to resume dialogue with the North.

He also said that he will explain the details of the progress to Japan and discuss possible cooperation with Tokyo.

The envoys are expected to hold in-depth discussions on trilateral cooperation in efforts to resume dialogue with Pyongyang and stably manage the situation on the Korean Peninsula.

The envoys are also likely to exchange opinions on humanitarian aid for North Korea and reported signs of resumed operation of the North's Yongbyon nuclear reactor.
Share
Print
List