Moon to Depart for US to Attend UN General Assembly 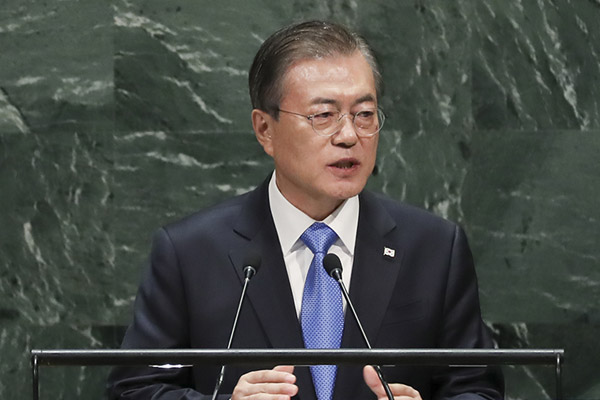 President Moon Jae-in will depart for the United States on Sunday to attend the 76th session of the United Nations General Assembly.

According to the top office, Moon will make a five-day trip to visit New York City and Honolulu.

Moon will stay in New York until Tuesday to participate in the annual meeting that opened last week.

On Monday, President Moon will attend the opening ceremony of the Sustainable Development Goals Moment (SDG Moment) of the Decade of Action event, along with members of South Korean boy band BTS.

Moon is scheduled to deliver a speech at the UN session on Tuesday. He is expected to explain his government's efforts to bring peace to the Korean Peninsula and call for continued support from UN member nations for the efforts.

The president will also hold bilateral summit talks with the leaders of Slovenia and Vietnam on the sidelines of the session.

After wrapping up his stay in New York, Moon will head to Honolulu to attend a ceremony for the transfer of the remains of South Korean and American soldiers killed during the Korean War, and another ceremony to posthumously present awards to independence fighters.