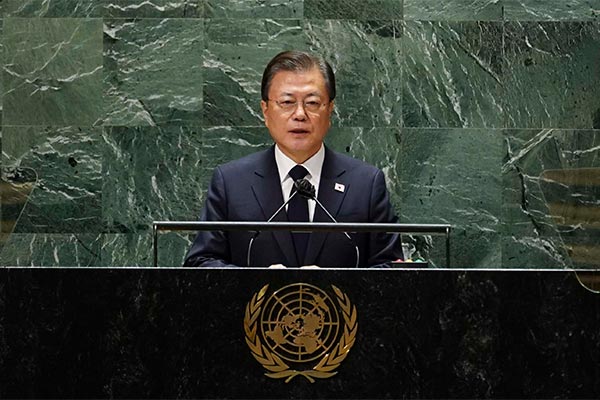 In his final address before the UN General Assembly, President Moon Jae-in has reiterated a call to formally end the Korean War. He also appealed for a "speedy resumption of dialogue" between the Koreas as well as the U.S.

In his keynote speech to the annual gathering of the world body in New York on Tuesday, the president asked for the world's support for an end-of-war declaration on the Korean Peninsula.

He proposed that either three parties, consisting of the two Koreas and the United States, or four parties, with the addition of China, come together and declare that the war on the Korean Peninsula is over.

Moon reaffirmed Seoul's will to engage in dialogue and cooperation to bring peace to the peninsula and to improve inter-Korean relations, as he noted that this year marks the 30th anniversary of the simultaneous admission of South and North Korea into the United Nations. He said that with the joint accession to the UN, the two Koreas recognized they were separate nations, but it was never meant to perpetuate the division.

The president then called for the North to brace for changes that benefit the era of a global community.

President Moon also said the world is witnessing the coming of an era of global community due to the COVID-19 pandemic, stressing that countries should prosper together and embrace one another.

He then pledged Seoul's active participation in the new journey for ushering in the era, counting on the UN to lead the way with a spirit of solidarity and cooperation.

The address marked Moon's fifth and last speech at the annual UN session, as his single, five-year term is set to end in May 2022.
Share
Print
List