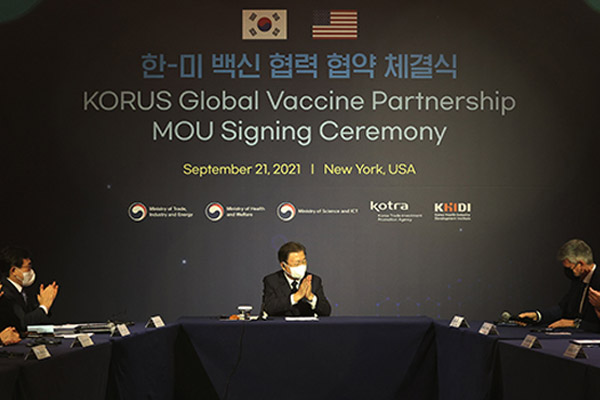 Seoul's presidential office said that the firm announced its plan on Tuesday at a ceremony on global vaccine partnership between South Korea and the U.S. in New York attended by President Moon Jae-in.

The firm already submitted a report to Seoul's Ministry of Trade, Industry and Energy on its plan to inject 52-point-five million U.S. dollars from 2022 to 2024.

Cytiva plans to produce disposable cell culture fluid in South Korea amid a global shortage of the material due to the COVID-19 pandemic.

It marks the first investment decision by a global vaccine material producer for a new manufacturing facility in South Korea since the pandemic broke out early last year.

The top office said that the investment decision is attributable to South Korea's advanced biopharmaceutical production capacity and the government's plan to invest two-point-two trillion won over five years to become a global vaccine hub.

The Tuesday ceremony marks a follow-up to the bilateral summit between Seoul and Washington in May where President Moon and U.S. President Joe Biden had agreed to a vaccine partnership dubbed the KORUS Global Vaccine Partnership.
Share
Print
List