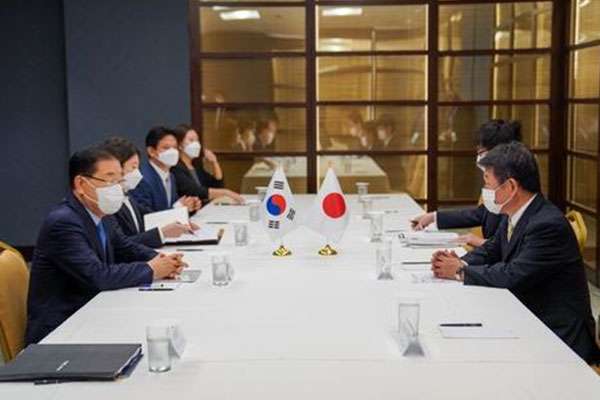 The top diplomats of South Korea and Japan held talks on Thursday to discuss ways to resolve pending issues between the two nations.

South Korean Foreign Minister Chung Eui-yong and his Japanese counterpart, Toshimitsu Motegi, sat down for talks in New York on the sidelines of the UN General Assembly.

According to Seoul's Foreign Ministry, Chung stressed the importance of inter-Korean cooperation, dialogue and engagement for the complete denuclearization and lasting peace on the Korean Peninsula.

The ministry said Motegi pledged to continue cooperation for substantive progress in the peace efforts.

Japan's Kyodo News said that the two sides failed to narrow the gap on bilateral issues including wartime compensation, repeating their respective positions.

Despite the differences, Chung and Motegi agreed to enhance close communication between the two nations through diplomatic channels for the future-oriented development of bilateral relations.
Share
Print
List