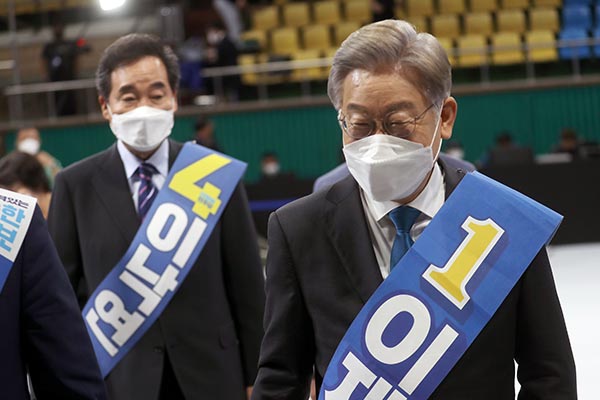 Gyeonggi Gov. Lee Jae-myung won another victory in the ruling Democratic Party's(DP) ongoing primary to select its candidate for next March's presidential election.

Lee earned 54-point-55 percent of the votes in the primary held on Sunday among delegates and registered members of the party in North Jeolla Province.

Former Prime Minister Lee Nak-yon, who clinched his first victory against the governor on Saturday, came in second with 38-point-48 percent.

The victory came amid controversy over a highly lucrative land development project in Seongnam City, which was carried out when the governor was the mayor of that city.

The governor is far ahead of Lee Nak-yon, securing an accumulated 53-point-01 percent, while the former prime minister has captured 34-point-48 percent.

Rep. Kim Du-kwan, who finished fifth, announced he will drop out of the primary race and declared his support for Lee Jae-myung.
Share
Print
List