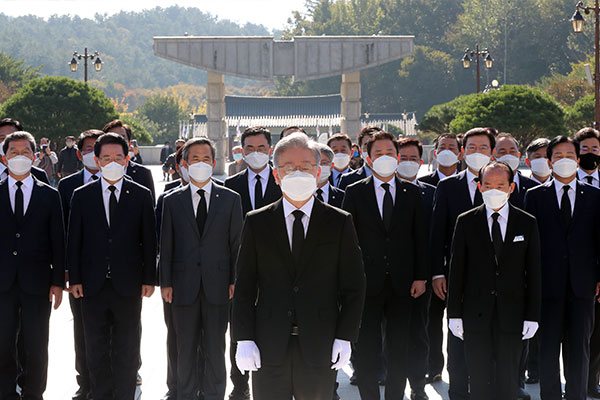 Lee made the criticism on Friday, while paying his respects at the May 18th National Cemetery in Gwangju, South Jeolla Province, as his first official public event since being named the ruling Democratic Party's(DP) presidential candidate.

Lee said he was not surprised by Yoon's comment that some believed Chun did well in politics despite the coup and crackdown on the Gwangju pro-democracy movement.

He accused Yoon, one of the main opposition People Power Party's(PPP) leading contenders, of living a life of privilege and therefore lacking any understanding of the severity that the name Chun Doo-hwan conjures up.

The governor also claimed that Yoon did make any contribution in the nation's fight for democracy, human rights and peace, thus likely thinks democracy came to be naturally.

Condemning Chun as the ringleader of crimes against the state and a mass murderer who can't ever be forgiven, Lee said if he becomes president, he will revise laws to abolish the statute of limitations against violent crimes by the state.
Share
Print
List