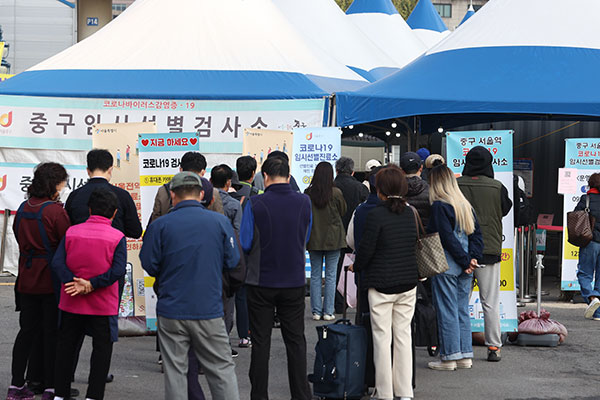 Daily COVID-19 cases surged to near two-thousand yet again on Wednesday as the nation is preparing for a shift to living with COVID-19.

The Korea Disease Control and Prevention Agency(KDCA) said that one-thousand-952 infections were confirmed throughout the previous day, raising the country's accumulative caseload to 356-thousand-305.

The daily tally increased by 686 from Tuesday, although it fell below the two-thousand mark for the 19th consecutive day.

Of the new cases, one-thousand-930 were local infections, while 22 were from overseas.

The capital region accounted for 82 percent of local cases at one-thousand-582. It marks the first time in 12 days the ratio hit 82 percent or higher. Non-capital areas added 348 cases.

Nine deaths have been reported, raising the death toll to two-thousand-797. The fatality rate is zero-point-79 percent. The number of critically ill patients is up by seven from the previous day to 341.
Share
Print
List