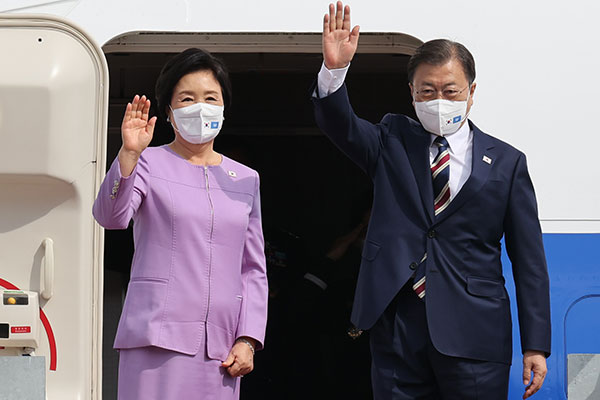 President Moon Jae-in embarked on a tour to Europe on Thursday to attend summits and a state visit to Hungary.

The president will first make an official visit to the Holy See on Friday to meet Pope Francis and Vatican Secretary of State Pietro Parolin,
marking Moon's second visit to the Vatican after his first in October 2018.

As the pope has repeatedly expressed his willingness to visit North Korea, Moon is expected to discuss the possibility of a papal visit in the meeting.

The president will then attend the summit for the Group of 20(G20) nations set for Saturday and Sunday in Rome before heading to the U.K. for COP26.

He will join world leaders at the UN climate change conference in Glasgow, Scotland, on Monday and Tuesday. Moon is expected to announce South Korea's revised target to reduce greenhouse gas emissions by 40 percent from 2018 levels by 2030.

The president will then make a state visit to Hungary and hold a summit meeting with Hungarian President Janos Ader. During the visit, he will visit a monument in memory of South Koreans killed in a 2019 ferry sinking in Budapest.

He will also hold a summit with leaders of the so-called Visegrad Group, which involves the Czech Republic, Hungary, Poland and Slovakia.