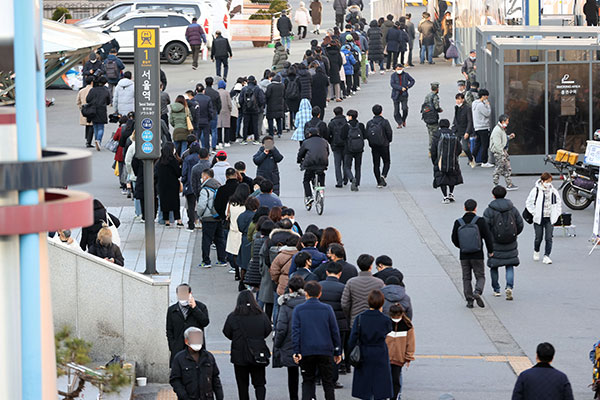 The daily tally hit a fresh high after surpassing five-thousand for the first time the previous day. From a week ago, the figure soared by one-thousand-329.

More than 41-hundred cases came from the capital region, including two-thousand-262 in Seoul and about 15-hundred in Gyeonggi Province.

The number of critically ill patients also rose by ten from a day ago to hit a fresh all-time high of 733, with people aged 60 and older accounting for 83-point-six percent.

The overall death toll rose to three-thousand-705, with additional 47 deaths. The fatality rate remains unchanged from a day earlier at zero-point-81 percent.

Of the new cases, five-thousand-242 were local transmissions and 24 were from overseas.

The nation reported its first cases of the omicron variant in five people on Wednesday, including a couple who recently returned from a trip to Nigeria.
Share
Print
List