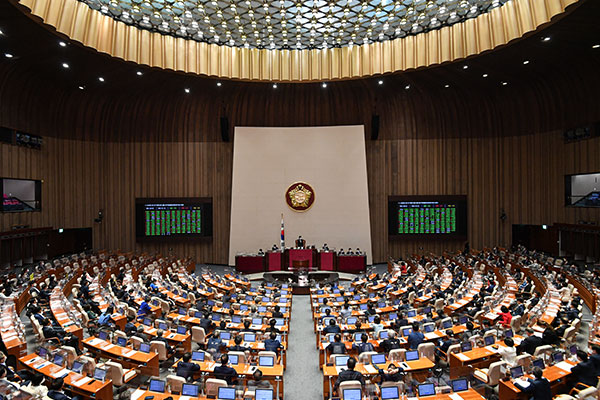 The National Assembly has passed a record 607-point-seven trillion-won national budget for next year.

The assembly held a plenary session on Friday morning and approved the 2022 budget bill in a 159-53 vote. Twenty-four lawmakers abstained.

The approved budget represents an increase of three-point-three trillion won from the government's initial proposal. It marks the second straight year that the budget increased from the government proposal in the process of parliamentary deliberation.

The budget includes 68 trillion won to support small businesses hit by the pandemic by providing relief funds and low-interest loans.

By law, the assembly is required to approve the state budget for the following year by December 2 every year.

It planned to hold a plenary session and pass the bill on Thursday, the legal deadline, but failed to do so due to last-minute negotiations between rival parties over a Navy project to develop a light aircraft carrier.
Share
Print
List