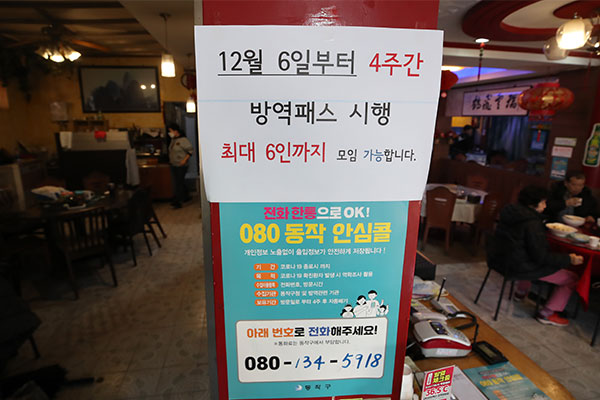 The government has started enforcing tightened caps on private gatherings for four weeks in order to contain the latest spike in COVID-19 cases.

According to health authorities, starting Monday, up to six people can gather in Seoul, Incheon and the surrounding Gyeonggi Province, while up to eight people can gather for private meetings in non-capital areas regardless of their vaccination status.

The previous caps were set at ten in the greater metro area and 12 in non-capital regions.

The COVID-19 pass system, which previously applied to high-risk virus-prone facilities such as indoor gyms and bars, has been extended to most multi-use facilities, including restaurants, cafes, cram schools, internet cafes, concert halls and libraries.

The system requires people to present proof of vaccination or a negative COVID-19 test for entry. However, it will not be applied to those who go to restaurants and cafes alone, even if they are unvaccinated.

The government will allow a one-week grace period before fully enforcing the tightened vaccine pass rule.

Starting in February, the system will also apply to teenagers who were born in January 2003 to December 2009.
Share
Print
List