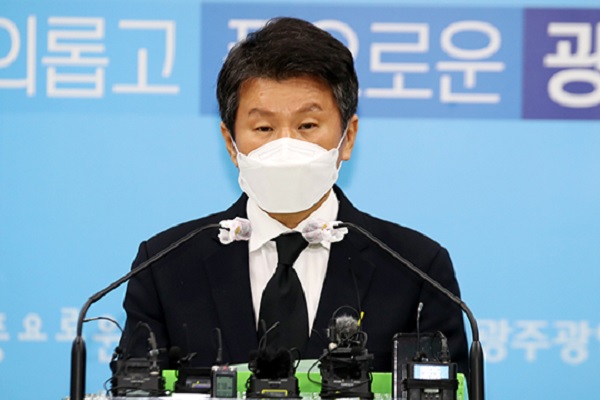 Hyundai Development Company(HDC) Group Chairman Chung Mong-gyu says he will step down from his post as head of the construction firm after an apartment building being constructed in Gwangju partially collapsed, for which five workers still remain missing.

In a press conference held on Monday at the group’s headquarters in Seoul, Chung extended his deep apologies to the families of the victims and the general public.

He also said he would fulfill his responsibilities as a major shareholder, indicating he intends to retain the position of chairman of HDC's holding company.

Chung said HDC came to gain the public’s trust with its IPark apartment brand since first building the Hyundai Apartments in Apgujeong-dong in 1976, but has lately greatly disappointed the public with two building collapses in Gwangju. An earlier accident had killed nine people in June.

He promised to devise all possible measures to regain the trust of customers and the public, raising the possibility of demolishing the structure and rebuilding it from the ground-up.

Exterior walls of a Hyundai IPark apartment had collapsed last Tuesday in Gwangju's Hwajeong-dong, with six workers believed to be inside.