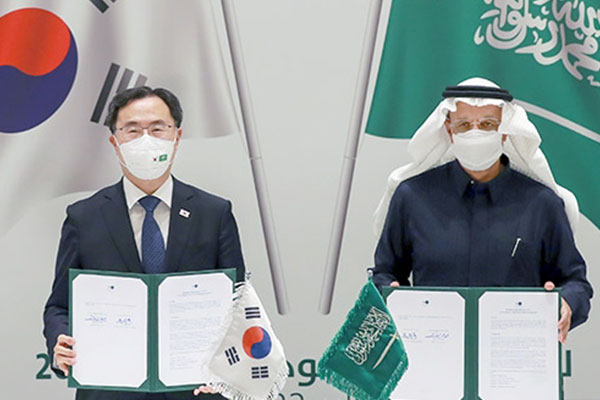 South Korea and Saudi Arabia signed over a dozen preliminary deals to deepen cooperation in various fields, including energy, healthcare and the hydrogen economy.

The signing of memoranda of understanding(MOU) was held during a business forum on smart innovative growth in Riyadh on Tuesday with President Moon Jae-in, who is on a two-day visit to the country, present.

The MOUs seek strengthened cooperation with nine involving the hydrogen and energy sectors and the remaining five regarding manufacturing, infrastructure, healthcare and the digital sector.

Under those deals, Saudi Arabia will provide carbon-neutral hydrogen and ammonia for South Korea while Seoul will assist in the operation of hydrogen-powered cars and hydrogen fueling stations in Saudi Arabia.

The Ministry of Trade, Industry and Energy said the MOUs will help build the countries’ partnership on the hydrogen economy and carbon neutrality.
Share
Print
List