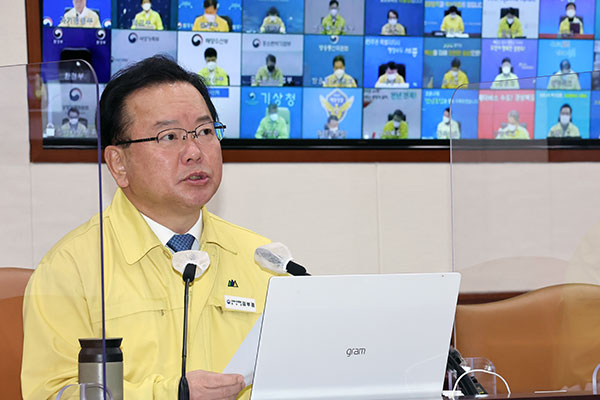 Prime Minister Kim Boo-kyum said on Wednesday that the full-fledged spread of the omicron variant has begun and the government will shift its priority to lowering the number of critical cases and deaths.

Kim made the remarks during a meeting of the Central Disaster and Safety Countermeasures Headquarters when he revealed that the latest daily COVID-19 tally topped 13-thousand.

Kim said despite cooperation from the public, the nation could not prevent the onset of the omicron wave.

However, he cautioned against excessive anxiety, as well as complacency, saying the government has prepared by accelerating booster shots, securing hospital beds and introducing antiviral drugs.

Mentioning the beginning of a trial run for a new omicron-focused testing system in four regions, the prime minister said it will be expanded nationwide on Saturday and called on the public to continue complying with antivirus and distancing measures.
Share
Print
List