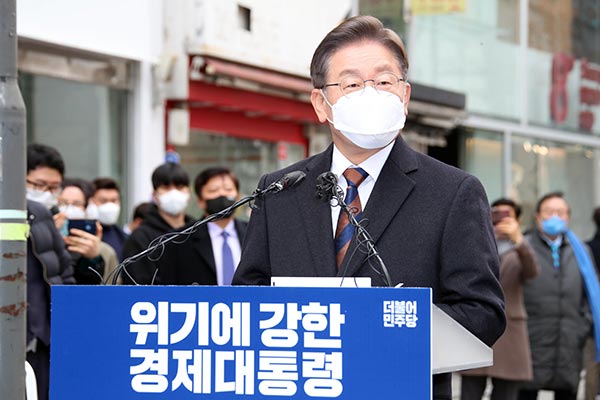 The presidential nominee of the ruling Democratic Party(DP) Lee Jae-myung visited Busan on the first day of the official campaign period, stressing the importance of national unity and the integration of conflicting ideals.

Making the remarks in an attempt to win over voters in the port city, a traditional conservative stronghold, Lee promised he would adopt all necessary policies regardless of their origin. He specifically referenced Hong Jun-pyo, a long-time conservative leader, and the late controversial leader Park Chung-hee, who seized power in a military coup.

Lee asserted that he would do anything to benefit the people, pledging an unbiased implementation of policies and appointments, with a disregard for Korea's deeply-rooted regional divisions.

Lee added that the crux of a democratic nation is not the politicians' ideologies, but knowing when to suspend one's own convictions if they contradict the national will.

Saying that Korea must walk towards national unity, he emphasized that what the people want is an integrated government that allows a capable leader to work for the nation.
Share
Print
List