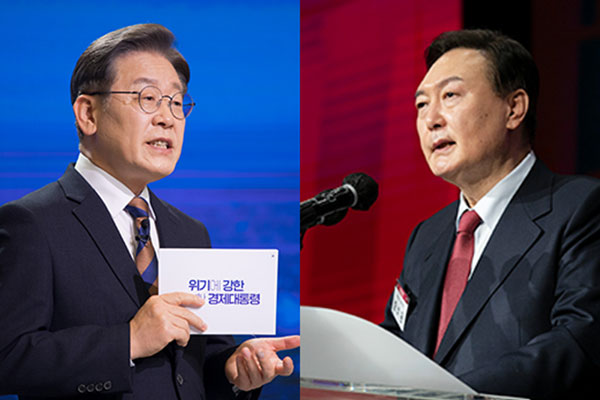 With about ten days until the presidential election, a new poll shows that the ruling Democratic Party's Lee Jae-myung and main opposition People Power Party's Yoon Suk Yeol are in a tie.

The KBS poll, conducted from Thursday to Saturday, asked two-thousand adults which candidate they would vote for if the election was held the next day.

In the hypothetical race, Lee and Yoon both received 39-point-eight percent, each.

Fifty-three percent of the respondents supported a transfer of power.

As for the current administration, the approval rating for President Moon Jae-in stood at 46-point-seven percent. Approval ratings for the DP and PPP were even at 36-point-nine percent.

The poll, conducted by Hankook Research, has a 95 percent confidence level with a margin of error of plus or minus two-point-two percentage points.