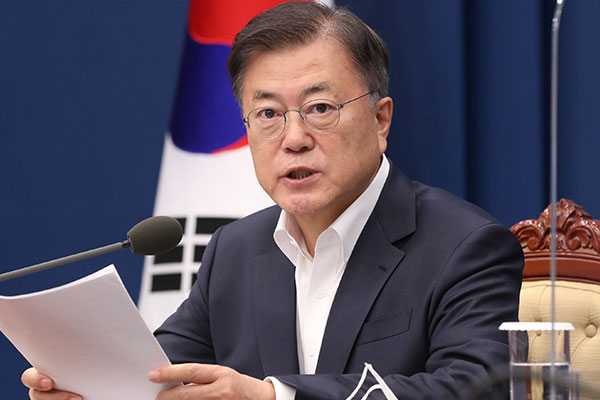 President Moon Jae-in has logged an average approval rating of 51-point-nine percent over his term, becoming the first South Korean president since 1987 to have the rate exceed the percentage of voters who supported him at the presidential election stage.

That's according to local pollster Realmeter, which gauged how the public viewed him on a weekly basis over Moon's five-year term. Moon had taken office after garnering 41-point-one percent of the votes cast in the 2017 presidential election.

In its latest assessment, Realmeter said on Monday that 41-point-four percent of some 2-thousand people surveyed on May 2, 3, 4 and 6 positively assessed Moon’s leadership, placing his overall average at 51-point-nine percent.

Meanwhile, his average disapproval rate came to 43-point-five percent, factoring in the 55 percent who said as much in the latest survey.

Realmeter added Moon is the first president to enjoy a higher average approval rate than that of his political party.

As for President-elect Yoon Suk Yeol, 51-point-four percent of those responding to the latest poll expected he will do well in managing state affairs, up one-point-seven percentage points from a week earlier.

Realmeter's survey had a confidence level of 95 percent, with a margin of error of plus or minus two-point-two percentage points.
Share
Print
List