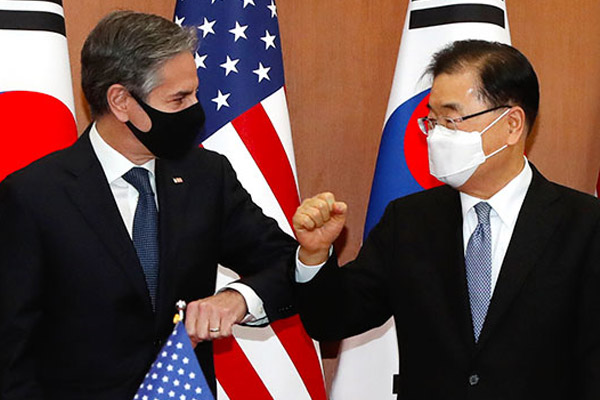 The top diplomats of South Korea and the U.S. held talks via video link and discussed Korean Peninsula issues and preparations for a presidential summit.

The two sides reaffirmed their existing stance of being open to dialogue and to exert concerted efforts to resume "principled and consistent" negotiations on denuclearization.

Park and Blinken also expressed concern over the reported COVID-19 outbreak in North Korea and agreed to continue consultations with the international community on providing humanitarian aid to the reclusive country.

The State Department said in a press release that the secretary emphasized ironclad, mutual commitment to the defense of South Korea and the allies' shared goal of the complete denuclearization of the peninsula as well as the importance of trilateral cooperation with Japan to support peace and security in the Indo-Pacific.

The top diplomats also discussed preparations for the upcoming summit between Presidents Yoon Suk Yeol and Joe Biden, scheduled in Seoul on May 21.