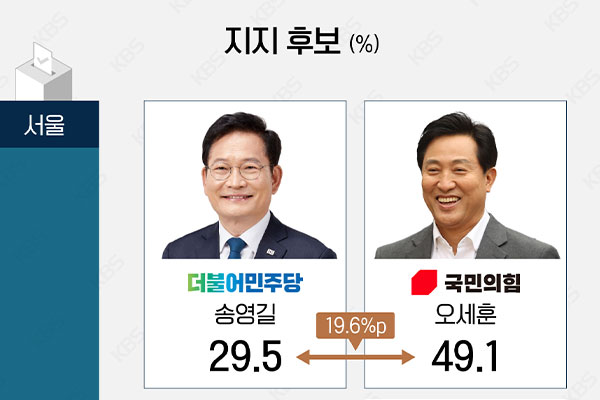 With about two weeks to go to the June 1 local elections, a new poll finds that Seoul Mayor Oh Se-hoon is still leading former Democratic Party(DP) Chairperson Song Young-gil by some 20 percentage points in the Seoul mayoral race.

According to a joint poll of KBS and two other broadcasters over the weekend in six regions including Seoul, 49-point-one percent of the respondents favor the incumbent Seoul mayor of the ruling People Power Party(PPP), while 29-point-five percent support Song.

In the race for Gyeonggi governor, the rival parties are running neck and neck, with PPP candidate Kim Eun-hye receiving 36-point-one percent of support and the DP's Kim Dong-yeon garnering 37-point-three percent. The gap narrowed to one-point-two percentage points from three-point-one in a previous KBS survey two weeks ago.

The ruling PPP secured the highest approval rating among political parties, receiving more than 40 percent in Seoul and Incheon as well as Gyeonggi Province.

The joint poll, conducted by Hankook Research and two other pollsters on Saturday and Sunday, has a confidence level of 95 percent with a margin of error of plus or minus three-point-one to three-point-five percentage points.
Share
Print
List