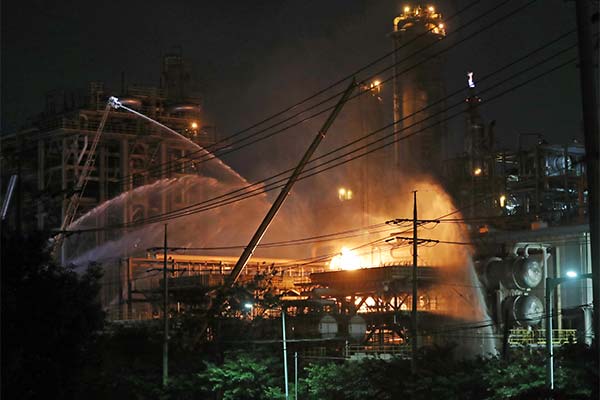 One person has been killed and nine more were injured in an explosion that occurred at an oil refinery in Ulsan.

Firefighters were called to the scene following the explosion at around 8:51 p.m. on Thursday.

One worker was found dead, and nine injured workers were taken to the hospital, including four with serious burns. A total of 26 people had been working at the oil plant run by S-Oil.

According to the company, the accident occurred as the workers were conducting a trial run after maintenance work for a process involving butane gas.

Fire authorities explained that while there is a low possibility of the fire spreading, it would take some time for the fire to be fully extinguished due to volatile substances remaining in the piping.

The CEO of S-Oil,  Hussain A. Al-Qahtani, held a press conference on Friday in Ulsan and apologized to the public.

He promised to fully cooperate with authorities in their investigation to determine the exact cause of the explosion and said he would make sure the injured workers receive the best care possible.

The CEO also said the plant would be closed until the cause of the accident is found and preventive measures are put in place, but assured that the company will devise ways to maintain a constant oil supply.
Share
Print
List