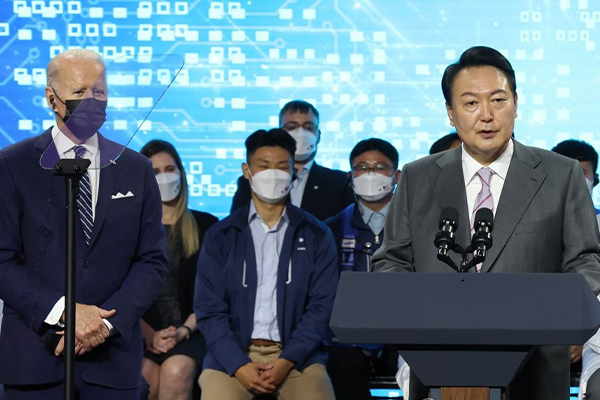 Touring a chip plant with visiting U.S. President Joe Biden, President Yoon Suk Yeol reportedly said that a free environment and creativity are essential in allowing high-tech industries to thrive and they cannot exist without a liberal democratic system.

Speaking to reporters Saturday, an official from the presidential office relayed Yoon's remarks made during the tour of a Samsung semiconductor plant in Pyeongtaek, Gyeonggi Province on Friday.

Yoon told Biden the facility is the site of an industrial and technological alliance between South Korea and the U.S. and that semiconductors were key to that alliance. Biden reportedly agreed with Yoon's remarks.

Arriving in Seoul on Friday afternoon, the U.S. leader chose to visit a chip plant as his first destination, instead of a military base. Yoon and Biden reaffirmed their resolve to develop the alliance not only militarily, but also on the economic security front.