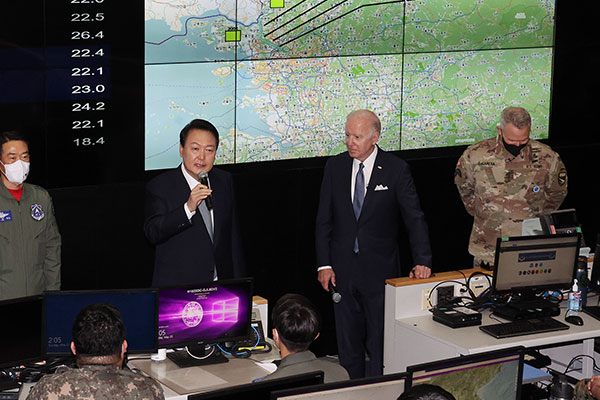 President Yoon Suk Yeol and Biden toured the Korean Air and Space Operations Center(KAOC) at Osan Air Base in Gyeonggi Province and stressed the role of the South Korea-U.S. alliance in maintaining peace.

The two leaders were briefed on the security situation at the center and encouraged the South Korean and American soldiers there.

President Yoon said the KAOC is a key site where the two allies jointly respond to advancing nuclear and missile threats from North Korea.

Expressing appreciation for the service of the soldiers contributing to the alliance, Yoon said that his visit to the center together with President Biden symbolizes the robust South Korea-U.S. alliance.

Biden also stressed the importance of the bilateral alliance, saying that deterring threats and underwriting stability is vital not only for the Korean Peninsula but for the world.

Biden wrapped up his three-day trip to South Korea with the visit to the KAOC and departed for Japan at around 3:30 p.m. for the second leg of his first Asia tour.
Share
Print
List