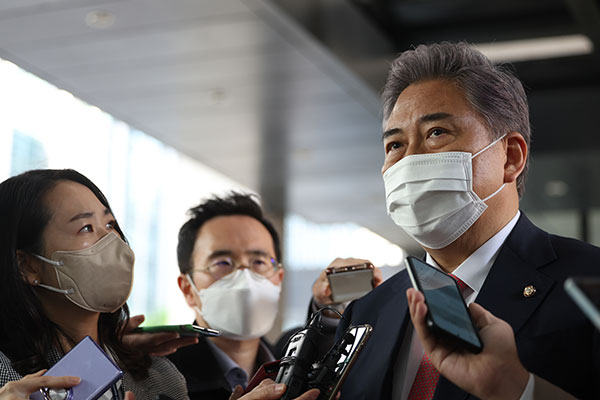 Foreign minister Park Jin says he believes South Korea can assume the role of guiding China to take part in regulations and order regarding the Indo-Pacific region.

Park made the remark on Sunday when he appeared on KBS News 9 with regard to views that the Indo-Pacific Economic Framework(IPEF) is part of Washington's campaign to counter the growing influence of China in the region.

Park said a consultative body like the IPEF was formed as Indo-Pacific countries are facing the fundamental challenge of seeking ways to establish both food security and future growth under a new order unfolding in the region.

Citing that South Korea has relations with China in a wide array of fields, including the economy, trade and services, Park said the 13 countries that are part of the IPEF all have economic or trade ties with China in one way or another.

The minister said it is unrealistic for the Indo-Pacific region’s economy to function without China.

The government made official South Korea’s participation in the IPEF during the South Korea-U.S. summit last Saturday. Seoul has stressed the move is not aimed at keeping China in check.
Share
Print
List