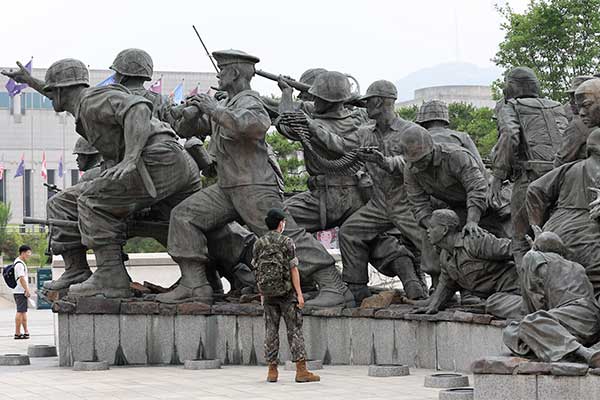 Marking the 72nd anniversary of the outbreak of the Korean War, the ruling People Power Party on Saturday called for a steadfast defense posture against North Korean threats.

The party's chief spokesperson Kim Hyung-dong said in a statement that the North continues to threaten peace on the Korean Peninsula by developing nuclear weapons, and strong defense and national security is the only way to protect South Korea and its people.

Kim said the PPP, with the Yoon Suk Yeol administration, will seek to develop a strong military based on science and technology and achieve denuclearization and peace on the peninsula through inter-Korean relations that are based on sound principles.

He also promised to continue excavation efforts on the Korean War dead until every fallen hero returns to their family.

In a social media post, PPP floor leader Kweon Seong-dong vowed to fix security policies, which he said were submissive to the North, and suppress the regime's provocations through a firm South Korea-U.S. alliance.

In a written briefing, spokesperson Jo O-seop said that a steadfast defense posture and peace efforts must continue and the two Koreas should engage in dialogue and foster tangible peace.