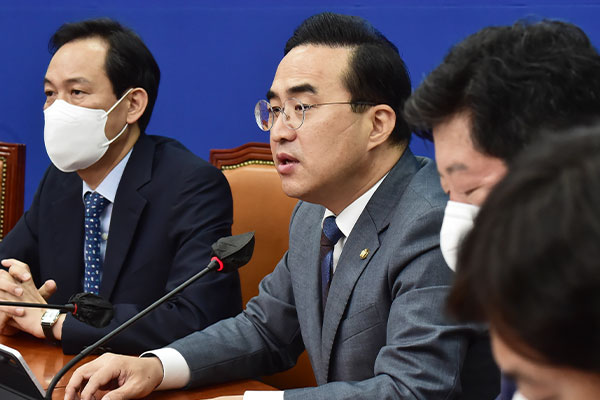 The main opposition Democratic Party(DP) has submitted a request for an extraordinary session in July with the intent to use its majority in parliament to push ahead with the formation of standing committees.

According to the DP, lawmakers Jeon Yong-gi and Oh Yeong-hwan submitted the written request signed by all 170 DP members to the National Assembly Secretariat on Tuesday afternoon.

Under parliamentary regulations, the DP's request would open the extra session from as early as Friday.

With a prolonged leadership vacuum plaguing the second half of the 21st Assembly, the session would see the longest-serving member take temporary leadership to elect a new speaker.

The DP, which earlier agreed to hand over the chairmanship of the Legislation and Judiciary Committee, is accusing the ruling People Power Party(PPP) of neglecting to look after people's livelihoods for political gain.

The PPP has slammed the DP for demanding, as a precondition, the formation of a committee on judicial reforms and a withdrawal by the PPP of a constitutional petition against laws pushed by the DP aimed at stripping the prosecution of its investigative power.
Share
Print
List