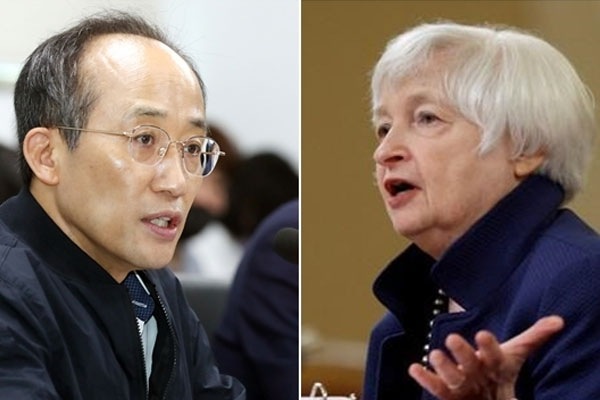 Top officials of South Korea and the U.S. held talks to discuss a U.S.-led proposal to impose a price cap on Russian oil and Seoul's potential participation.

According to the ministry, Yellen mentioned the need to introduce a price cap on Russian oil in a bid to stabilize high energy prices and also to reduce Moscow's oil revenue. She explained how related discussions were proceeding in the international community, including the Group of Seven(G7) member countries.

In response, Choo said he understands the intent of the price cap, noting that South Korea also faces inflationary pressure amid rising global oil costs. He asked the U.S. to share details on the price cap introduction as soon as an action plan is drafted.

The officials also recognized how the two sides have maintained close coordination on various economic issues as well as sanctions on Russia and agreed to continue such cooperation.

Choo and Yellen will meet face-to-face when the treasury secretary visits Seoul later this month. Both will also attend the Group of 20(G20) finance ministers meeting in Indonesia in mid-July.
Share
Print
List