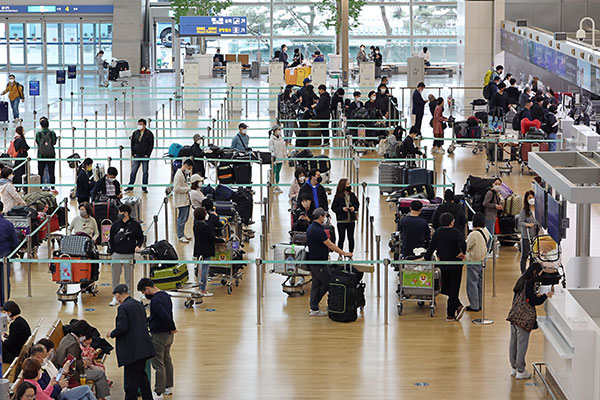 The country's number of international air passengers jumped over 30 percent on-month in June to surpass one million with increased flights amid eased virus curbs.

According to data by the Ministry of Land, Infrastructure and Transport on Sunday, the number of passengers who traveled on international and domestic routes from local airports reached about four-point-six million in June, up four-point-six percent from a month earlier.

The number of passengers who flew on domestic routes slightly declined to three-point-32 million in June.

However, the comparable figure for international routes came to one-point-28 million, jumping 36 percent from a month ago. The monthly figure surpassed one million for the first time since the outbreak of COVID-19.

From a year earlier, the figure spiked nearly 420 percent.

The rise is apparently due to the government's flight restoration plans and increased flights, with Incheon International Airport now operating around the clock as before the pandemic.
Share
Print
List