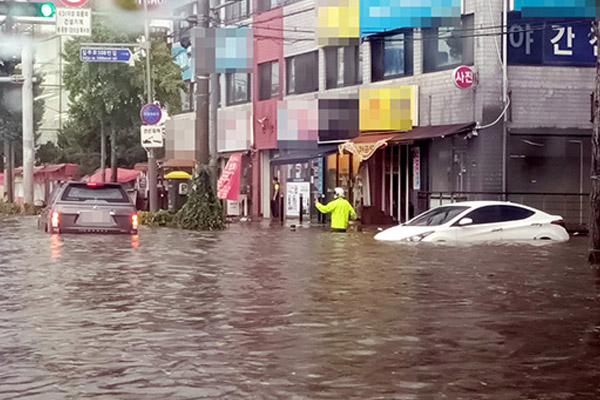 At least eight people have died and six people are reported missing after a heavy downpour pounded the central region on Monday.

According to the Central Disaster and Safety Countermeasures Headquarters, as of 3 p.m. on Tuesday, eight people died, nine people were injured and seven people were declared missing after the torrential rains.

Three persons in the Gwanak District of Seoul were found dead after reporting that they were trapped in their semi-basement home on Monday evening.

In the Dongjak District in Seoul, a public employee died while removing a fallen roadside tree, possibly from electric shock. Another person died in the district when their house was flooded.

Two persons died in Gwangju, Gyeonggi Province, with one found dead under the debris of the collapsed bus station and the other from a landslide on a sloped road.

One person was found dead following a landslide in Hwaseong, Gyeonggi Province.