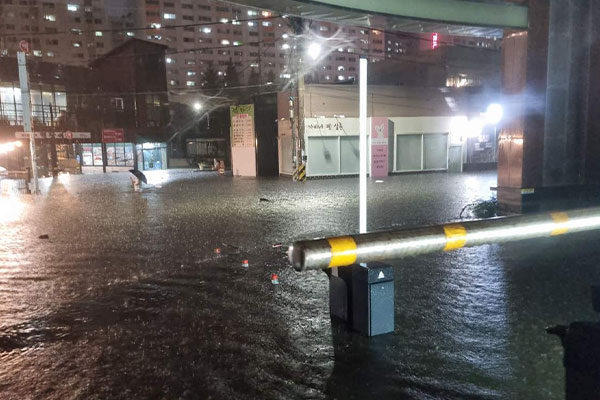 The powerful rainfront that bombarded the capital region with record downours is moving toward the south, pounding Chungcheong Province and the southern regions.

In Chungcheong Province where substantial rainfall wreaked havoc overnight, more than 180 incidents of damages were reported across public and private facilities, including the inundation of some 30 houses and stores and over two hectares of farmland.

The stationary front moved down to North Jeolla Province this morning, causing significant damage and inundating roads, particularly in Gunsan, which saw 70 millimeters of rainfall per hour.

The Korea Forest Service has raised landslide warnings one notch for North Jeolla and Gyeongsang provinces, from “attention” to “caution.”

The National Institute of Forest Science forecasts up to 200 millimeters of rain in Chungcheong, North Jeolla and North Gyeongsang provinces until Friday.
Share
Print
List