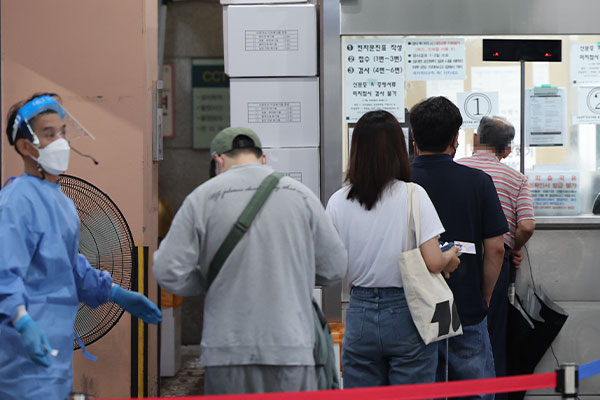 Daily COVID-19 cases in South Korea remained in the latter 100-thousand-range for the second consecutive day amid a resurgence in infections.

The Korea Disease Control and Prevention Agency said on Thursday that 178-thousand-thousand-574 infections were reported throughout the previous day, including 633 from abroad. The number of imported cases marked the largest to be posted since the pandemic broke out.

The country's cumulative caseload stands at around 21-point-86 million.

The number of seriously or critically-ill COVID-19 patients stood at 470, remaining in the 400s for the second straight day after having stood at 469 on Tuesday.

Sixty-one more people died of the virus, raising the death toll to 25-thousand-813, while the fatality rate remains at zero-point-12 percent.

The government projects the current COVID-19 wave in South Korea will peak at the end of this month with new daily infections coming in at around 200-thousand or fewer, while the drop-off is predicted to be slower than that of previous waves.
Share
Print
List