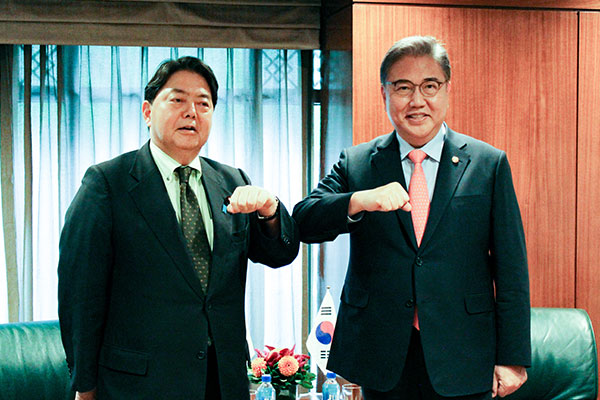 The top diplomats of South Korea and Japan held talks in the United States ahead of a possible summit between their leaders in New York.

Following a 50-minute meeting at a hotel in New York on Monday afternoon, foreign minister Park Jin told reporters that he and his Japanese counterpart Yoshimasa Hayashi had good discussions, agreeing to make sincere efforts to improve Seoul-Tokyo relations.

The top diplomats reportedly held an in-depth exchange on the issue of compensation for South Korean victims of Japan's wartime forced labor.

Minister Park is said to have explained to Japan possible solutions to the issue as discussed in a civilian-government panel, including raising victim compensation funds through the private sector.

Park reportedly conveyed the opinions of all levels of society as well, including the victims, calling on Japan to respond with sincerity.

A foreign ministry official said that the top diplomats agreed to continue dialogue and consultations between diplomatic authorities of the two nations.
Share
Print
List