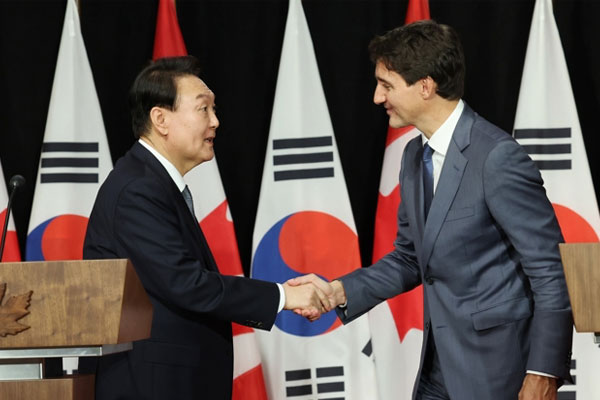 The two sides held talks in Ottawa on Friday, touching upon a wide array of topics, including natural resources, technology, climate change and North Korea.

While upgrading their bilateral relations to a comprehensive strategic partnership, Yoon and Trudeau held a joint news conference following the summit.

[Sound bite: President Yoon Suk-yeol (Korean/English)]
"Today's talks were very meaningful in that they took place against the backdrop of a combination of challenges faced by the international community, including a pandemic, supply chain disruptions and climate change... "
"We plan to build a cooperation regime in the area of minerals and natural resources between the governments and businesses of the two countries in order to secure stable supply chains after the pandemic... "

With the supply chains susceptible to disruption, the bilateral partnership is all the more important as South Korea is a major producer of semiconductors and EV batteries and Canada is a top mineral exporter.

Yoon during the summit briefed his Canadian counterpart on his "Audacious Initiative" aimed at incentivizing Pyongyang to reengage with the world. The Canadian prime minister is said to have expressed strong support for Yoon's efforts to achieve a nuclear-free Korean Peninsula.

[Sound bite: Canadian Prime Minister Justin Trudeau]
"But we're seeing and we're living in a time where totalitarian regimes like North Korea, Korea or Russia, for that matter, are discovering that democracies around the world are not simply going to stand by while they threaten the, while those regimes threaten the peace, stability and prosperity that has come from so many decades of a rules based order that was respected. We will continue to stand with our Republic of Korea friends."

The two sides said they will communicate closely via high-level diplomatic and trade channels in a bid to respond to "shocks caused by changes in the international order."

With the year 2023 marking the 60-year anniversary of the two country's diplomatic relations, Yoon invited Trudeau to visit South Korea and the Canadian leader accepted the offer.