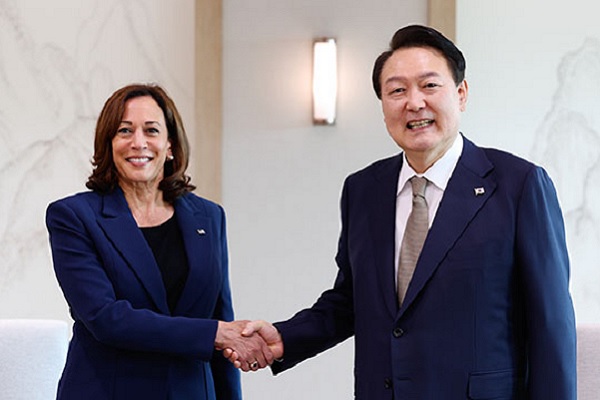 U.S. Vice President Kamala Harris reportedly assured President Yoon Suk Yeol that both she and U.S. President Joe Biden are aware of Seoul’s concerns over the new law affecting South Korean automakers and will address them as the regulations are implemented.

The top office’s deputy spokesperson Lee Jae-myoung said in a Thursday briefing that the vice president offered the reassurances in a meeting at the top office with President Yoon.

Yoon had expressed hopes that close cooperation will produce a mutually satisfactory solution to Seoul’s concerns that the U.S. Inflation Reduction Act discriminates against South Korean automakers by excluding them from tax incentives offered on electric vehicle purchases.

One presidential official noted that the vice president's response is a step forward from previous U.S. statements on the issue.

According to Lee, during the 85-minute meeting, Yoon and Harris also addressed ways to enhance the alliance and exchanged views on North Korea, sharing concern over North Korea's recent nuclear policy legislation.

Harris reaffirmed the U.S.’ steadfast commitment to the defense of South Korea, and Yoon remarked that the vice president's trip to Seoul just four months after President Biden's visit reflects the strength of the bilateral alliance.

They also discussed economic security and other regional and global matters of mutual interest, reportedly even touching on Yoon’s hot mic remarks in New York, with Lee saying that Harris told Yoon the U.S. is not bothered by the incident at all.
Share
Print
List