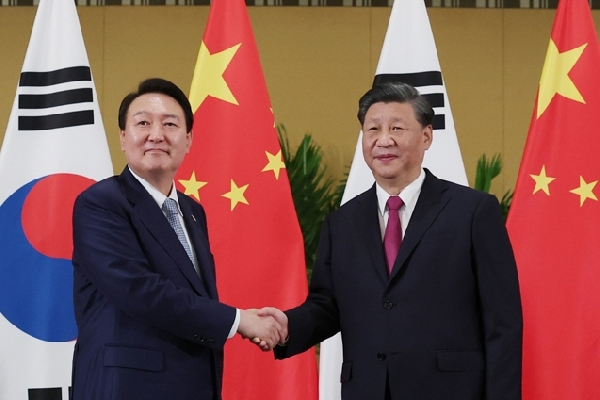 President Yoon Suk Yeol sat down with Chinese President Xi Jinping in Bali on Tuesday and called on Beijing to play a more active and constructive role in dealing with North Korea.

Seoul’s presidential office said that Yoon and Xi discussed issues of mutual interest during their first-ever talks held on the sidelines of the G20 summit on the Indonesian resort island.

Citing the unprecedented frequency of North Korea's missile launches, Yoon at the meeting urged the Chinese leader to play a more active and constructive role as a permanent member of the UN Security Council, according to the presidential office.

Xi is said to have responded that the Korean Peninsula issue is a matter of mutual interest for both China and South Korea, stressing the importance of safeguarding peace in the region.

Xi is also reported to have urged the South Korean government to actively seek ways to improve the strained inter-Korean relations.

Regarding the Yoon administration’s “bold initiative” promising assistance for the North in return for the regime’s denuclearization, Xi said that Beijing will actively support the plan in the event that Pyongyang positively responds to Seoul's proposal.

During the 25-minute meeting, the two leaders also assessed the notable development of bilateral exchanges and cooperation since the two countries signed diplomatic ties in 1992.

They shared the understanding that Seoul and Beijing will further mature their relations based on the principles of mutual respect and reciprocity as well as joint interests.

During the summit, Yoon also proposed that high-level dialogue between the two countries be held on a regular basis to jointly overcome multiple challenges including the pandemic, the global economic recession and climate change.

Xi positively responded to the idea of activating high-level bilateral dialogue and in turn proposed the establishment of a one-point-five track dialogue involving both government officials and private-sector experts.

They also agreed that the second-phase of negotiations on the bilateral free trade agreement be swiftly finalized and concurred on the importance of cultural and people-to-people exchanges.

Xi also kept open the possibility of accepting Yoon’s invitation to South Korea, saying he will positively consider the offer when the pandemic situation has stabilized, and expressed hope that Yoon will also visit China at a mutually convenient time.
Share
Print
List