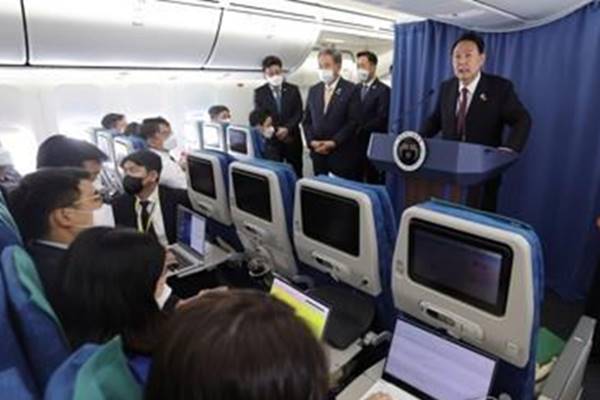 The International Federation of Journalists(IFJ) has condemned the presidential office's decision to bar reporters of local broadcaster MBC from boarding the presidential plane during President Yoon Suk Yeol's tour of Southeast Asia.

The IFJ said in a statement on its website that it condemns the exclusion of media based on critical reporting of the president and his administration.

Calling for South Korea’s proud history of democracy and press freedom to be defended, the organization said that Yoon's continued targeting of MBC "sets a dangerous precedent."

It added that the South Korean media has rightly defended its freedom and the IFJ commends the solidarity of ongoing efforts from journalists and those in the media to call out government acts of intimidation and censorship through attempts to block media access.

The top office banned MBC reporters from boarding the presidential plane during Yoon's trip, claiming that the broadcaster has engaged in repeated distortions and biased reporting on foreign affairs, namely coverage of the “hot mic” scandal during Yoon’s trip to the U.S.

An MBC report during Yoon's trip to the U.S. in September claimed that the president had used crude language in a remark about U.S. President Joe Biden and Congress, a claim the top office denied while criticizing the broadcaster for damaging South Korea-U.S. relations.
Share
Print
List